Augmented Reality: discovery of the past and future planning

The new frontier of the virtual world is called Augmented Reality, or simply AR, and it is a technology that will allow us to see reality through applications designed to mediate between us and the world around us. How it’s possible? Through devices, making us live aspects that otherwise we would never be able to perceive with our five senses. In Italy this new technology isn’t used a lot, but all possible clues lead us to think that its use will be more extended in the future.

What is and what are its functions?

The expression “Augmented Reality” was used for the first time in 1992 by Thomas Preston Caudell, a researcher who described it as the possibility to see, through the webcam of a smartphone and/or tablet, real world mixed with virtual elements designed specifically. It is a powerful technology, able to affect perceptions, especially sight and hearing, increasing it in terms of sensitivity and experience. These virtual items don’t replace reality, but simply enrich it. Digital world will integrate by the physical one allowing the user to continue trying surrounding reality in normal way, using additional multimedia elements, contextualized within the reality itself.  During following years, AR was an experimental technology studied in various laboratories and universities around the world. For ten years, technology has slowly migrated from research laboratories to market in applications which range from marketing to entertainment, from medicine to publishing, from advertising to multimedia.

In more recent times this kind of technology become public knowledge thanks to Google Glass project, the name of the innovative glasses of online research. They showed information and data within the field of view, using a small display positioned above the eye of the user. But the current problem, however, is that achieving large-scale commercialization and the “complete” version of this technology has proved to be very difficult. Techniques behind it are extremely complex, but research and experimentation won’t stop until people will be able to use contact lenses to see in AR, and it could be happen very soon.

THE FUTURE OF AUGMENTED REALITY: THE FUSION BETWEEN PHYSICAL AND DIGITAL WORLD

This “fusion” between the physical and digital world seems inevitable and soon we will realize that this technology may even make  in the future virtual worlds and atmospheres which don’t exist anymore. Such as the use of this technology in important sectors artistic and archaeological heritage where AR (in collaboration with the 3D animation), is used in museums and archaeological sites just recreating past environments. 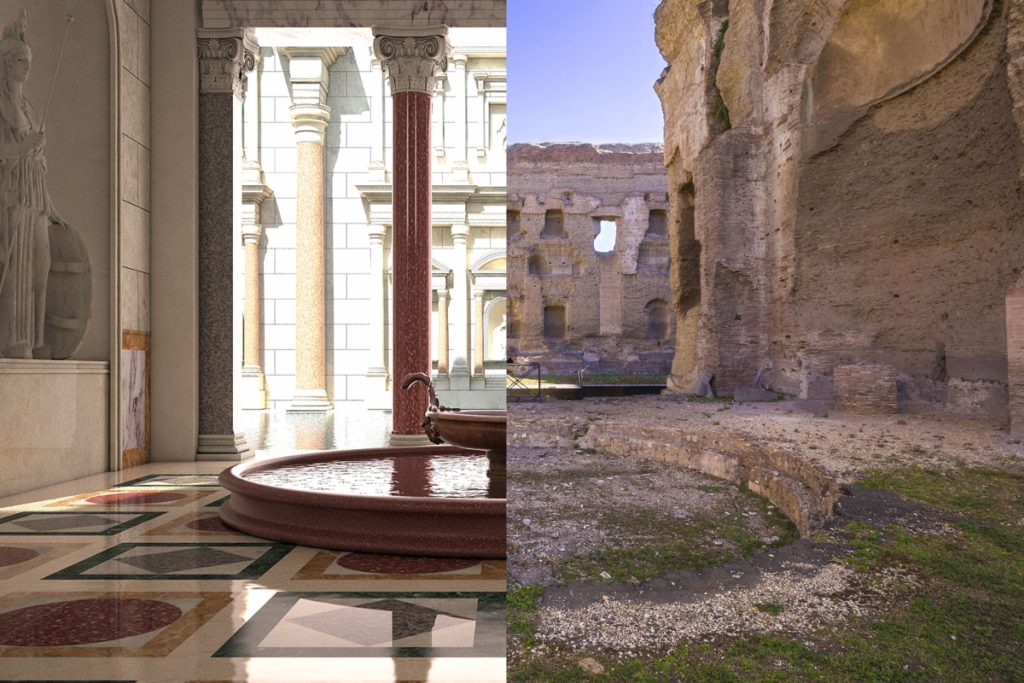 For example, “Terme of Caracalla” become the first large Italian archaeological site entirely usable in 3D. Thanks to a viewer, you can immerse yourself in the ancient Roman vestiges to recreate the idea of that era. An ideal condition for an immersive three-dimensional reconstruction, with the possibility of a continuous comparison between the surrounding reality and its reconstruction in the viewer, thus allowing a journey through time between the past and the near future.

In this case, an architect can try to add trees in an empty park simply by framing them with the tablet, but also move objects with the gesture of a hand or with voice commands. The AR also provides information and application indications relevant to the main market segments such as contextual information and the geo-location of points of interest. Pointing the smartphone on a street, we can know the location of monuments or shops, get directions on how to get to the nearest restaurant for example, or information on the history of the buildings that surround us

THE FUTURE OF AUGMENTED REALITY

The future of Augmented Reality is expanding his use on a global scale, showing an exciting perspective and increasing its powerful communication skills, where technologies could start to have a significant impact on individual life and on society as a whole, studying the user experience to make products usable and successful.

So, a new era is about to invade our planet, but he is prepared for this change, or rather we are ready for this future? Will we be able to descend between what is real from the virtual? Guess all we have to do is wait.